Shahzad also has several years of experience as a Partner at a well-known firm in Leicester, and is highly respected among his peers for his work in this area. He is qualified as a police station and court duty solicitor, and has substantial experience of all areas of criminal defense work including terrorism, fraud and serious violent crime. He has a particular interest in serious fraud cases, and has been involved in high profile and complex VHCC, VAT Fraud and serious violent crime cases. 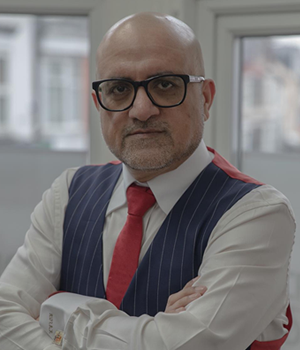 Some of Shahzad’s notable cases include successfully defending one defendant in a £120million MTIC fraud (carousel fraud). Furthermore, he represented one of the main defendants in 30 defendant case involving allegations of conspiracy to facilitate illegal immigration into the European Union and United States of America and money laundering.

Shahzad has always believed in a sustainable legal aid system and that a properly funded legal aid system is a pillar of the welfare state and has a fundamental role in reducing inequalities in society. To this end, the firm has a legal aid contract in Crime. He is also interested in helping his local community, and the firm can accommodate for pro bono work in certain cases, and holds a weekly legal advice surgery within the community in Leicester and Derby.

Shahzad has been at the forefront of local and national community events. He has organised, managed and promoted music shows, Melas, charity events, cultural events involving many different cultures and communities. He is involved in promoting love and peace amongst communities.